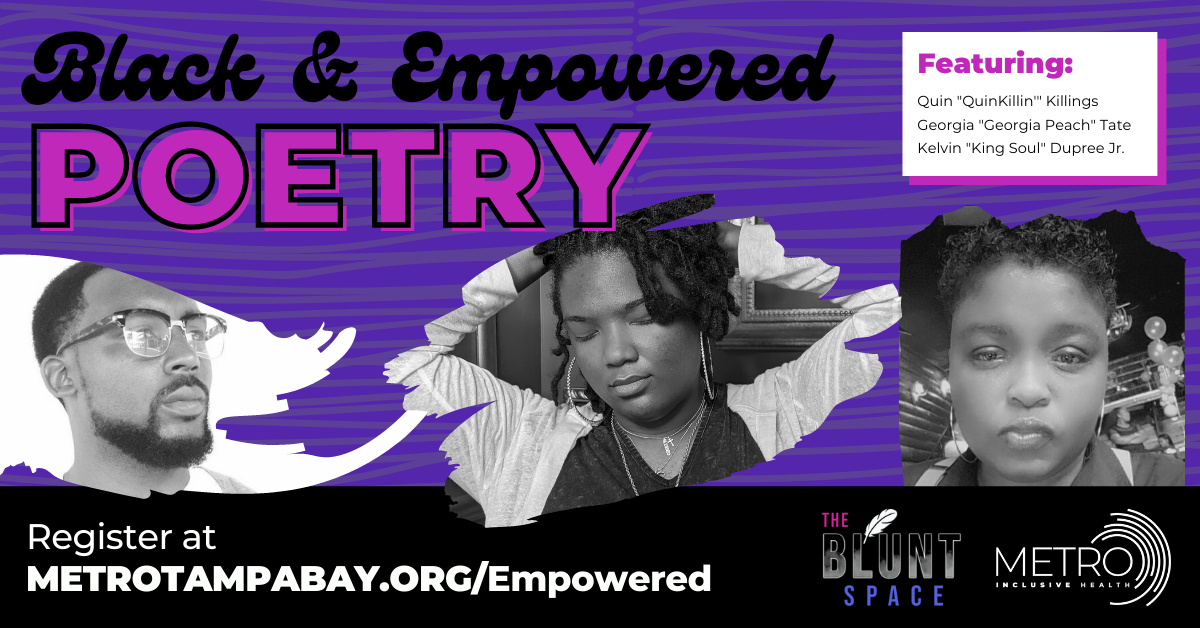 Next up in the Black & Empowered event series (October 27, 6-8PM at inclusivitea.), METRO is partnering with The Blunt Space to bring you a night of poetry in commemoration of Black Poetry Day. Black Poetry Day on October 17th honors past and present Black poets. The day also commemorates the birth of the first published Black poet in the United States, Jupiter Hammon, who was born in Long Island, New York, on October 17th, 1711.

During the first hour of the event, we invite you to participate in an open mic. Bring your own writing or a favorite poem to read onstage. Starting at 7PM, we will close out the night with featured poets from The Blunt Space (see below).

Light refreshments will be served on a donation basis. Please note that the maximum capacity is 20 persons, per COVID safety regulations; facial masks are required indoors.

QuinKillin’ is a 24-year-old spoken word artist and writer who advocates for LGTBQ+ rights, black feminism, and normalization of human sexuality. She is also an alumnae of the University of South Florida with a Bachelor Degree in Psychology. Originally from Miami, Florida, she dove into spoken word in 2011 and competed in poetry slams throughout Miami-Dade County, including Louder Than A Bomb. Currently, she resides in the Daytona metropolitan area performing at various spoken word venues and events and is navigating through life as an activist and advocate of marginalized groups. QuinKillin’ can be found on IG @queeny_bihh and every last Wednesday of the month hosting The Blunt Space Incorporated premier open mic, Real Loud Shit.

Born and raised Tampa Poet King Soul starting writing at age of 16, as a coping mechanism to express his ongoing frustrations in his surrounding environment. It was during this time that he began to experience what the power of his words truly meant.Now, with over 10 years of experience, the poet, author, mentor, and certified life consultant continues to share his life story on stages throughout Florida. King Soul can be found on IG @itsjust_soul.