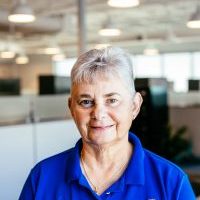 A proud U.S. Navy Veteran, Chicky served our country for 11 years. Between the years of 1997 to 2007 she received her A.A., B.S., and M.S. in Nursing from the University of South Florida. Chicky has had experience working as a Psychiatric RN and later as a Nurse Practitioner in a Post-Traumatic Stress Disorder program. Throughout her lifetime, Chicky has been given various awards such as the Florida Humanist Heroine of the Year Award in 1995 and the Cambridge “Who’s Who” Lifetime Member Award in 2009. During her time off, she enjoys spending time with her wife and their two black cats. She is also a diehard Tampa Bay Rays fan with season tickets and loves spending her time cycling, including getting ready for The SMART Ride.